100 Fabulous People Launch https://www.catherinekhoo.sg/wp-content/uploads/2020/08/Group-Shot_1st.jpg 1000 625 Janus Education Janus Education https://www.catherinekhoo.sg/wp-content/uploads/2020/08/Group-Shot_1st.jpg August 21, 2020 August 21, 2020
It was 10th August 2020. At 10:00am SGT, people started streaming into the meeting room in anticipation for a book a year in the works, now ready for release. Some of the attendees had even entered earlier to catch up with old friends and meet new ones. But amidst the laughter and anticipation, there was something different – No one was physically present. 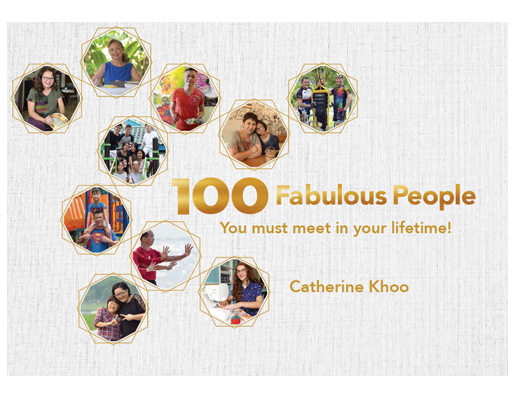 Instead, over 80 people from all walks of life filled the screens of computers, gathered to wait for the launch of something fabulous: a book titled “100 Fabulous People You Must Meet in Your Lifetime”. Written by Catherine Khoo, the release of the book attracted audiences from various countries such as India and Australia. A phenomenon that could not be achieved if the book launch was held physically. One of the attendees hailing from the United States, LeeJen Choo-Franger agrees with the sentiment, “Even though it was an online meeting, I feel the excitement of being able to meet the team who helped to make the book possible.”

But what is the book about, precisely? Why are all these people gathered in an online meeting room for its release? With 50% the proceeds of the book going to the Singapore Cancer Society (SCS), “100 Fabulous People” is an important book celebrating the wonder of life, and the people that embody it. Gathering 100 people from diverse backgrounds to talk about the trials they faced and how they surmounted it was no easy feat. But after a year of hard work, Catherine made the impossible, possible. Thanks to the team of photographers, writers and project leaders that rallied behind her, the book is realised today. 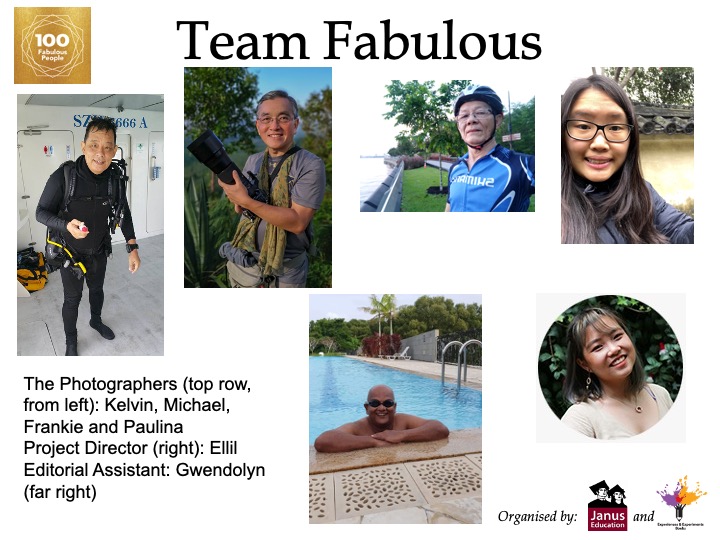 The book launch was opened by SCS chairman, Dr Ang Peng Tiam. Thanking the team for their hard work raising over $15,000 of funds for the society, he spoke briefly of the motivational impact of the book. After Dr Ang, it was time to hear a couple of our featured Fabulous People speak. What they spoke of in the short two-hour launch was nothing short of inspiring. Terene Seow, an attendee and Fabulous Person agreed, “The speakers were good and well-chosen. The Zoom meeting was a good platform to know them and hear their stories.” 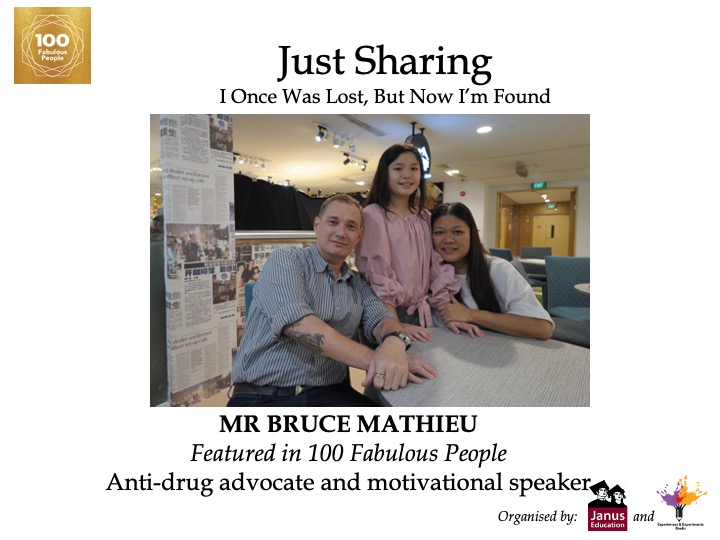 Bruce Mathieu – an ex-drug addict – spoke of his emotional struggle with drugs for 30 years and how he managed to turn his life around with the support of his family. Now an anti-drug advocate and motivational speaker, he works at The Living Well Café where he continues his good work of guiding ex-convicts back onto the right path. His moving speech about family and life touched the hearts of the attendees, even eliciting a few tears along the way. Another speaker that spoke to the hearts of the people was Zakir Hossain Khokan, the founder of the One Bag One Book project, an initiative to get migrant workers to read and connect through books. Due to the pandemic, the migrant dormitories were hit hard, and his team had been working ceaselessly to ensure the mental health and safety of the quarantined workers. It was reassuring to know that the migrant workers were cared for in these uncertain times, but Zakir acknowledges that more could be done. Calling for action, he invited the attendees to donate books and volunteer their help wherever possible through One Bag One Book or contacting him through zakir.journal@gmail.com.

Indeed, their speeches were so inspiring that Joanne See, Executive Life Planner and fellow Fabulous Person, along with some other attendees, are going to donate books to One Bag One Book and have made plans to visit Bruce’s café, The Living Well. “Being able to meet these fabulous people over Zoom was inspiring”, Joanne affirms, expressing hope that she will be able to meet and chat with them in person one day. 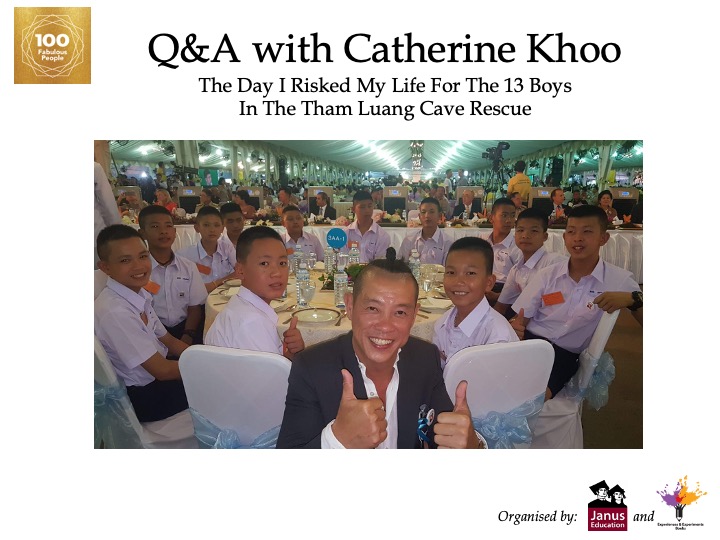 The book launch even saw a hero, Douglas Dylan Yeo, take the stage to talk about his experience as a volunteer diver for the 2018 Thailand cave rescue. The world was glued to their screens in fear for the safety of a group of boys trapped within the rapidly flooding cave. Thankfully, all the boys were rescued, and Douglas was awarded the Padi Medal of Valour for his bravery. For Douglas, the rescue was more than just a medal ¬– it was a life-changing experience. Now immortalised in a book titled “Zero Visibility“, Douglas’ journey is one that you will be able to share as well. 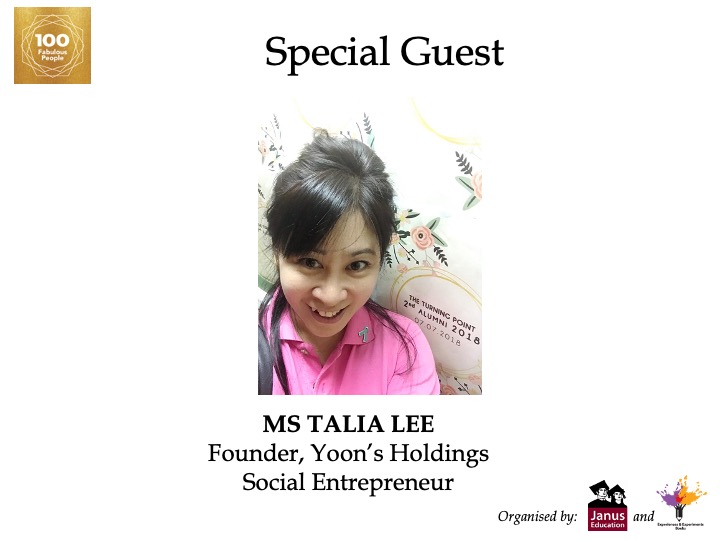 The book launch could not end without a speech from the special invited guest, Talia Lee, a social entrepreneur. Although not featured in “100 Fabulous People”, she is no doubt someone who is truly fabulous in her undertakings. Formerly a drug addict, Talia is now the founder of a social enterprise, Yoon’s Traditional Kueh. With the goal of reintegrating female ex-convicts back into society, Talia aims to dissolve the stigma against women ex-drug offenders in hopes of creating a more inclusive community. Although it is no easy task, it is a task that truly deserves more recognition.


The launch was short, but fruitful as the attendees left with their hearts full and purposeful. But that isn’t the end. Aside from the amazing speakers we had at the launch, there are over 90 more people you absolutely need to meet. From Dr Tan Cheng Bock to Shunji Matsuo, the list is endless. You can purchase “100 Fabulous People You Must Meet in Your Lifetime” here to read more about them.
The fun of meeting our featured people doesn’t stop there either! There is another launch of the book planned for 26 September 2020. Dr Choo Bok Ai, an oncologist, and a few cancer survivors featured in the book, will be invited to speak about their experiences. Stay tuned for more details!
Recent Posts
Categories
Read Previous

How to Write a Story!